A week of surprises 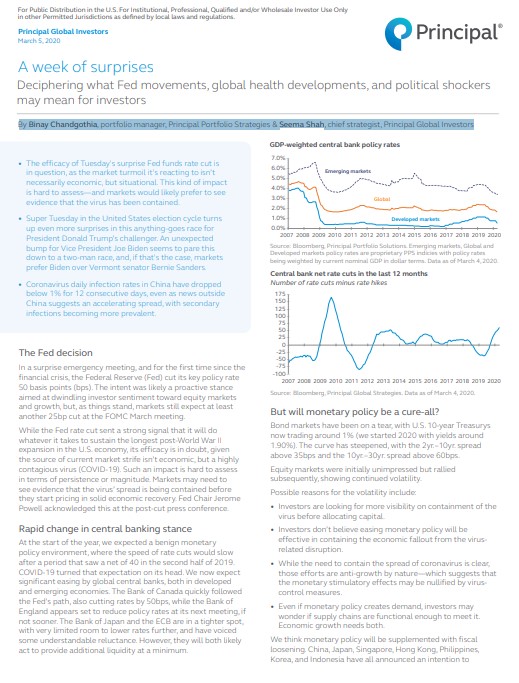 In a surprise emergency meeting, and for the first time since the financial crisis, the Federal Reserve (Fed) cut its key policy rate 50 basis points (bps). The intent was likely a proactive stance aimed at dwindling investor sentiment toward equity markets and growth, but, as things stand, markets still expect at least another 25bps cut at the FOMC March meeting.

While the Fed rate cut sent a strong signal that it will do whatever it takes to sustain the longest post-World War II expansion in the U.S. economy, its efficacy is in doubt, given the source of current market strife isn't economic, but a highly contagious virus (COVID-19). Such an impact is hard to assess in terms of persistence or magnitude. Markets may need to see evidence that the virus' spread is being contained before they start pricing in solid economic recovery. Fed Chair Jerome Powell acknowledged this at the post-cut press conference.

At the start of the year, we expected a benign monetary policy environment, where the speed of rate cuts would slow after a period that saw a net of 40 in the second half of 2019. COVID-19 turned that expectation on its head. We now expect significant easing by global central banks, both in developed and emerging economies. The Bank of Canada quickly followed the Fed's path, also cutting rates by 50bps, while the Bank of England appears set to reduce policy rates at its next meeting, if not sooner. The Bank of Japan and the ECB are in a tighter spot, with very limited room to lower rates further, and have voiced some understandable reluctance. However, they will both likely act to provide additional liquidity at a minimum.

Possible reasons for the volatility include:

We think monetary policy will be supplemented with fiscal loosening. China, Japan, Singapore, Hong Kong, Philippines, Korea, and Indonesia have all announced an intention to ease fiscally. Germany is suspending its fiscal rules to create room for a stimulus. How soon this fiscal impulse is absorbed by economies will determine the short-term success of such programs.

In addition to virus-related developments, the U.S. presidential election process began its roll into the big finale of the presidential race. On March 3, "Super Tuesday," 14 states held primaries to determine the Democratic candidate who will ultimately challenge Republican President Donald Trump.

Results showed the race winnowing down to a two-man show: Senator Bernie Sanders and former Vice President Joe Biden. According to Real Clear Politics, Biden is slated to win the majority of delegates in 10 of the states that held primaries on Super Tuesday, compared to Sanders' four.

Biden won the South (no surprise there) but he also took Texas's majority and won in other unexpected places, such as Minnesota and Massachusetts. The votes in California may take some time to be tallied, but so far Sanders looks like the lead vote-getter. Following the results, former New York City mayor Michael Bloomberg and Senator Elizabeth Warren each announced the end of their respective campaigns.

With more than half of the delegates needed to take the democratic nomination still up for grabs, there's still a long way to go before we get to know Trump's challenger. Important to note: If a candidate wins the plurality of the votes, but not 1,991 delegates needed for the nomination, there will be a contested convention in Milwaukee this July. A contested convention would surely be good for Trump.

Biden's moderate stance does come with caveats. He's calling for a corporate tax rate at 28%, up from the current 21% (Sanders is at 35%). He'd restore the top income tax bracket to 39.6% from 37% (Sanders proposes 52%). Still, if it's a Democrat occupying the White House, markets prefer Biden over Bernie.

The story from inside China is turning positive, with the coronavirus daily infection rate having dropped below 1% for 12 consecutive days. As total active confirmed cases trend lower, quarantines are lifting, and businesses are resuming operations. Passenger traffic is the highest since the New Year holiday started. Car sales, truck traffic, and coal usage are all up from very low levels. And 65-70% of migrant workers have returned to work.

However, news outside the country suggests an accelerating spread, with secondary infections becoming more prevalent. The number of new infections outside China has risen from around 500 last week to more than 1,500, with South Korea, Italy, and Iran being the largest incremental contributors.

Growth Outlook
Growth will continue to be revised down. At the macro level, the OECD now forecasts global recession in 2020, driven by a potential contraction in China's GDP growth in 1Q 2020. Our own global manufacturing PMI index (provisional) dropped from 49.9 to 47.1 as China's PMI fell precipitously, while our leading indicator for global industrial production continued to signal sub-trend output growth.

Our recession dashboard currently shows six out of the 19 indicators in the recession zone, as compared to five in the month prior. But weak equity market returns could soon join the recession signalling category if markets continue their downward spiral.

Our original forecast for 2020 earnings growth to increase 8% for MSCI AC World in dollar terms is now at risk. The year could end with no earnings growth, unless the virus is contained in a timely manner.

A related question: Are policymakers pressing the panic button too soon? And could it overstimulate the economy? Certainly, if the virus is somehow quickly contained as it has been in several countries (for example, Singapore managed to swiftly control the spread without introducing Draconian measures), it could set the markets up for an interesting few months. With abundant liquidity, loosening fiscal stance, very low interest rates, and policymakers reluctant to roll back easing measures implemented with such alacrity, growth proxies (equities, oil, high yield spread products) could be propelled significantly higher.

Decisions for investors
While the economic and virus fundamentals are currently negative, a few positives have appeared on the horizon, such as:

Unless otherwise noted, the information in this document has been derived from sources believed to be accurate as of March 2020. Information derived from sources other than Principal Global Investors or its affiliates is believed to be reliable; however, we do not independently verify or guarantee its accuracy or validity. This material contains general information only and does not take account of any investor’s investment objectives or financial situation and should not be construed as specific investment advice, recommendation or be relied on in any way as a guarantee, promise, forecast or prediction of future events regarding an investment or the markets in general. The opinions and predictions expressed are subject to change without prior notice. Any reference to a specific investment or security does not constitute a recommendation to buy, sell, or hold such investment or security, nor an indication that Principal Global Investors or its affiliates has recommended a specific security for any client account.

Subject to any contrary provisions of applicable law, Principal Global Investors and its affiliates, and their officers, directors, employees, agents, disclaim any express or implied warranty of reliability or accuracy and any responsibility arising in any way (including by reason of negligence) for errors or omissions in this document or in the information or data provided in this document.

Past performance is no guarantee of future results and should not be relied upon to make an investment decision. All figures shown in this document are in U.S. dollars unless otherwise noted. Investing involves risk, including possible loss of principal.

This material may contain ‘forward looking’ information that is not purely historical in nature. Such information may include, among other things, projections and forecasts. There is no guarantee that any forecasts made will come to pass. Reliance upon information in this material is at the sole discretion of the reader.

This document is issued in: