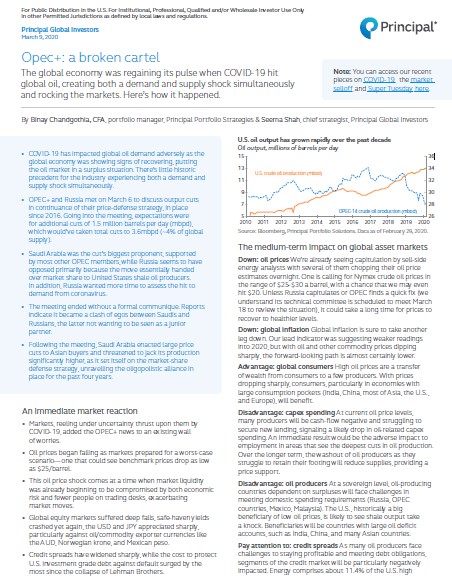 The global economy was regaining its pulse when COVID-19 hit global oil, creating both a demand and supply shock simultaneously and rocking the markets. Here's how it happened.

U.S. oil output has grown rapidly over the past decade
Oil output, millions of barrels per day

Down: oil prices
We're already seeing capitulation by sell-side energy analysts with several of them chopping their oil price estimates overnight. One is calling for Nymex crude oil prices in the range of $25-$30 a barrel, with a chance that we may even hit $20. Unless Russia capitulates or OPEC finds a quick fix (we understand its technical committee is scheduled to meet March 18 to review the situation), it could take a long time for prices to recover to healthier levels.

Down: global inflation
Global inflation is sure to take another leg down. Our lead indicator was suggesting weaker readings into 2020, but with oil and other commodity prices dipping sharply, the forward-looking path is almost certainly lower.

Advantage: global consumers
High oil prices are a transfer of wealth from consumers to a few producers. With prices dropping sharply, consumers, particularly in economies with large consumption pockets (India, China, most of Asia, the U.S., and Europe), will benefit.

Disadvantage: capex spending
At current oil price levels, many producers will be cash-flow negative and struggling to secure new lending, signaling a likely drop in oil-related capex spending. An immediate result would be the adverse impact to employment in areas that see the deepest cuts in oil production. Over the longer term, the washout of oil producers as they struggle to retain their footing will reduce supplies, providing a price support.

Pay attention to: credit spreads
As many oil producers face challenges to staying profitable and meeting debt obligations, segments of the credit market will be particularly negatively impacted. Energy comprises about 11.4% of the U.S. high yield market (ICE BOFAML Index), with a composite rating of B1. Credit spreads for the U.S. high yield sector had already widened significantly this year (1,099bps over Treasurys as of March 6, 2020), even before the overnight carnage in oil prices. For reference, the spread had widened to 1,650bps in Feb 2016 at the peak of a similar oil-bust episode. Unless prices recover quickly, spreads could widen further in coming weeks, pricing in a more severe cycle of downgrades/defaults.

The possibility of a bear market in equities

Unless otherwise noted, the information in this document has been derived from sources believed to be accurate as of March 2020. Information derived from sources other than Principal Global Investors or its affiliates is believed to be reliable; however, we do not independently verify or guarantee its accuracy or validity. This material contains general information only and does not take account of any investor’s investment objectives or financial situation and should not be construed as specific investment advice, recommendation or be relied on in any way as a guarantee, promise, forecast or prediction of future events regarding an investment or the markets in general. The opinions and predictions expressed are subject to change without prior notice. Any reference to a specific investment or security does not constitute a recommendation to buy, sell, or hold such investment or security, nor an indication that Principal Global Investors or its affiliates has recommended a specific security for any client account.

Subject to any contrary provisions of applicable law, Principal Global Investors and its affiliates, and their officers, directors, employees, agents, disclaim any express or implied warranty of reliability or accuracy and any responsibility arising in any way (including by reason of negligence) for errors or omissions in this document or in the information or data provided in this document.

Past performance is no guarantee of future results and should not be relied upon to make an investment decision. All figures shown in this document are in U.S. dollars unless otherwise noted. Investing involves risk, including possible loss of principal.

This material may contain ‘forward looking’ information that is not purely historical in nature. Such information may include, among other things, projections and forecasts. There is no guarantee that any forecasts made will come to pass. Reliance upon information in this material is at the sole discretion of the reader.

This document is issued in: