How did we get to this tipping point?

First, following several rounds of often-fractious discussions, the U.S. and China agreed on a Phase One trade deal in January. Among other steps, China agreed to purchase US$200 billion of additional U.S. products by 2021.

Then, despite the deal, pressure continued to build. The U.S. administration faulted the Chinese government for not sharing enough timely information on the COVID-19 outbreak. It also imposed further trade restrictions on Chinese 5G giant Huawei, blacklisted 33 Chinese companies for human rights violations, and passed a bill that could delist Chinese American Depository Receipts (ADRs) from U.S. exchanges.

Now, against this backdrop of heightened tensions and the U.S. administration's need for a political win, China's relationship with HKSAR has taken center stage.

Now, the spotlight's on Hong Kong

The U.S. sees China's increasing political influence on HKSAR as violating the region's existing governance agreement. When Britain handed the island back to China, it was with the provision that a "one-country, two systems" rule would allow a level of autonomy in the HKSAR until 2047.

In May, the Chinese government approved the drafting of a national security law that could substantially increase the country's power over Hong Kong. The U.S. considered this a breach of the one-country, two-systems guarantee, prompting President Donald Trump to announce a review of all special relationships with HKSAR.

How would Hong Kong fare without a U.S. special relationship?

Currently, the HKSAR enjoys a special status: The U.S. treats it as an independent country. Rescinding this designation could have a range of knock-on effects, ranging from marginal to severe.

Because of the special relationship, tariffs applied to China don't affect Hong Kong exports. While the U.S. likely won't risk its US$25 billion trade surplus with the HKSAR by imposing tariffs on the region, even if it did the effects would be minimal. Since 99% of HKSAR exports are re-exports (manufactured outside the region), only 1% of its exports could attract new tariffs. Additionally, the U.S. purchases only 7% of HKSAR’s exports, while China accounts for about 55%.

As a nuclear option, the U.S. could bar HKSAR from owning U.S. dollars. This would be incredibly damaging to HKSAR, as the region pegs its currency (the Hong Kong dollar) to the U.S. dollar, issues its own currency against U.S. dollars, and backs its monetary base with U.S. dollar assets. While the U.S. might use this to bargain on other matters, we think it's highly unlikely to be implemented, given the turbulence it would inflict on the global economy.

U.S. restrictions on Hong Kong financial services firms would substantially impede the region’s economy. Such actions could include preventing U.S. funds from buying HKSAR-listed stocks or sanctioning HKSAR banks involved in Chinese business dealings. Though possible, these are also extremely low-probability events. Interestingly, the ADR measures the U.S. has already taken against China may actually end up benefiting HKSAR, as the stock exchange of Hong Kong will become the preferred listing platform for such Chinese entities.

Given the strength of the HKSAR's financial metrics, we don't believe an attack on the currency peg would be likely or successful. The region is highly rated by credit rating agencies. It has experienced a huge property boom in recent years but has no negative equity in home loans, insulating banks from the risk of declining property prices (EXHIBIT 1). It has fiscal reserves of US$150 billion and its exchange fund holds foreign currency assets worth US$495 billion, which are way above its obligations under the currency peg mechanism. In short, Hong Kong has significant ammunition to meet U.S. dollar demand if there's a run on its currency (EXHIBIT 2).

For us, the main question is: Will China de-peg the Hong Kong dollar from the U.S. dollar, and re-peg it to the Chinese renminbi? Although probable in the long run, it's not an immediate concern, given the HKSAR’s critical role as a financial gateway for Chinese companies. 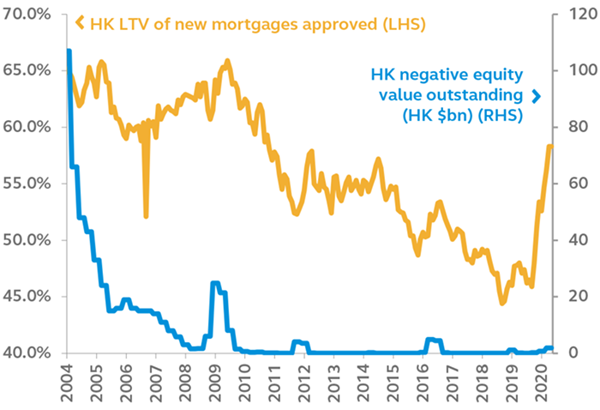 Source: Bloomberg, Principal Global Asset Allocation. Data as of May 31, 2020. 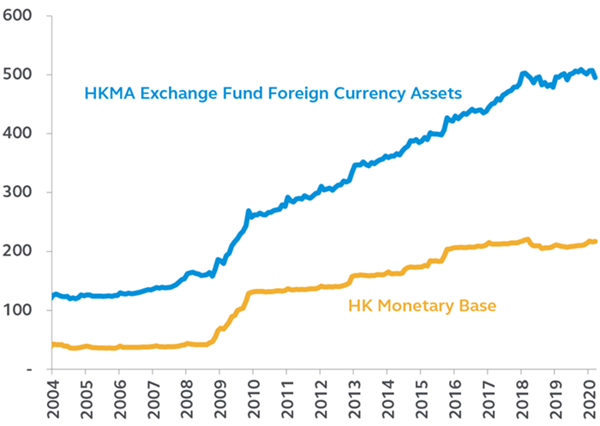 Source: Bloomberg, Principal Global Asset Allocation. Data as of May 31, 2020.

The implications for your portfolio's HKSAR stocks

We find that HKSAR stocks exposed to the region's domestic economy—rather than those listed on HK exchanges but representing de facto China risk exposure—are currently cheap. This is due to increased volatility around COVID-19, pro-democracy protests, and possibly new protests over the national security law as we approach the Legislative Council elections in HKSAR. We expect such stocks will likely underperform relative to the better structural stories of China-oriented exposures.

Expect noise, but not extreme responses

Although the U.S. administration is drawing on the conflict to claim a political victory in an election year, it will almost certainly avoid nuclear options. Actions will likely revolve around sanctions against the officials behind the national security law. On the other side, China's responses to U.S. measures have been restrained, and will likely remain so.

Realistically, neither China nor the U.S. can afford significant economic damage in the current environment. Even if temperatures rise, the desire to avoid detrimental economic outcomes should prompt both sides to keep working with each other. Yet, the risk of policy mistakes leading to ever more dire actions does exist.

This material covers general information only and does not take account of any investor’s investment objectives or financial situation and should not be construed as specific investment advice, a recommendation, or be relied on in any way as a guarantee, promise, forecast or prediction of future events regarding an investment or the markets in general. The opinions and predictions expressed are subject to change without prior notice. The information presented has been derived from sources believed to be accurate; however, we do not independently verify or guarantee its accuracy or validity. Any reference to a specific investment or security does not constitute a recommendation to buy, sell, or hold such investment or security, nor an indication that the investment manager or its affiliates has recommended a specific security for any client account. Subject to any contrary provisions of applicable law, the investment manager and its affiliates, and their officers, directors, employees, agents, disclaim any express or implied warranty of reliability or accuracy and any responsibility arising in any way (including by reason of negligence) for errors or omissions in the information or data provided.

This material may contain ‘forward-looking’ information that is not purely historical in nature and may include, among other things, projections and forecasts. There is no guarantee that any forecasts made will come to pass. Reliance upon information in this material is at the sole discretion of the reader.

This document is issued for use in: