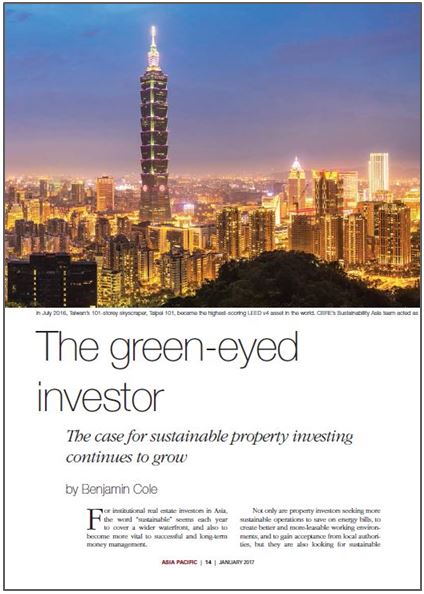 For institutional real estate investors in Asia, the word “sustainable” seems each year to cover a wider waterfront, and also to become more vital to successful and long-term money management. Not only are property investors seeking more sustainable operations to save on energy bills, to create better and more-leasable working environments, and to gain acceptance from local authorities, but they are also looking for sustainable cities or environmentally-improving cities in which to pour long-term cash. Indeed, buzz phrases such as “transit-oriented development” have long entered the property-investment lexicon as positives.

And no wonder. It is difficult to imagine a metropolis of the future succeeding — attracting a dense population that boosts property values — without amenities, often cultural and infrastructural, yet increasingly environmental.

Urban denizens want parks, museums, nightlife, walkable shopping streets, and freedom from soul-draining commutes. And in a challenge for urban conglomerations everywhere but especially in Asia, residents prefer clean air and water. It is a tall order but then, the customer — in this case, migrating businesses and people — is always right.

To be sure, hundreds of millions of employed urbanites globally still must endure polluted cities with deficient infrastructure in India, China, Southeast Asia and even parts of the developed world. To this day, the successful metropolises of Hong Kong and Seoul have some of the poorest air quality of major global cities, according to a recent report from The Economist.

But “come situate your business in our congested, polluted city” can hardly be the metropolitan calling card of the future, to say nothing of tourism, an industry slated to grow handsomely as Asian and global incomes rise.

Some institutional real estate experts even posit capital and people are already leaving mainland China for environmental reasons. Of note, much of the capital outflows from China to New York City, San Francisco, Sydney, or Vancouver, British Columbia are likely influenced by the good air quality, as well as cultural amenities, of these cities.

Many institutional property investors and managers are aware of the global metropolitan implications of sustainable, liveable cities. But as important, large property owners are also “thinking local” and acting on it — that is, putting their own houses in order, creating greener, more-valuable structures.

Institutional real estate investors have many pathways to developing money-saving sustainability strategies. PGIM Real Estate takes an interesting approach: Every year it monitors and ranks sustainability metrics at roughly 900 structures in its US$66.9 billion (US$48.4 billion net) portfolio. Once ranked, the good and bad outlier buildings become highlighted, and action is taken on the underperforming buildings.

“We strategically benchmark environmental performance annually at more than 900 buildings globally to help us identify our performance outliers. Once identified, a building professional will validate the performance and provide the technical guidance necessary to improve building efficiency,” says David DeVos, global director of sustainability at PGIM Real Estate.

In perusing 900 buildings within its portfolio for performance, the firm develops deep institutional knowledge not only of the best and tested sustainable practices, but also of local variables, such as building codes, climate, energy costs, management teams and regulations, that can limit or extend operations. Buildings that rank high on the list of 900 properties can also be examined for what works in actual practice — as a still-evolving field, the sustainability movement experiences times when theory and practice do not meet, or when new products and systems fall short of promise in the work-a-day world.

While not every new sustainable system or product always performs as expected, especially with so many variables from tenant to tenant, constant advancements in energy technologies make retrofits increasingly possible, notes DeVos.

“Even in low-energy-cost markets, especially where building ownership pays for the building energy use, a simple LED lighting retrofit can have returns accretive to an investment fund’s financial performance,” explains DeVos.

One of the 900 buildings ranked by PGIM Real Estate was its 13,950-square-metre White Sands Shopping Centre in Singapore, a medium-size, 23-year-old mall with 125 tenants. After a review by the firm, it began planning for a renovation in 2012, leading to completion of a mall upgrade and renovation in 2015.

In terms of sustainability, some of the improvements included a passive facade design (in general, an exterior wall designed to let in natural light or keep out heat), high-efficiency cooling systems, low-energy lighting installations, retrofitted water-efficient fixtures, and retrofitted-air handling units, explains DeVos.

As a result, energy use at White Sands declined by about 25 percent, generating savings of US$300,000 annually. As an added bonus, White Sands is a stop on the Singapore Mass Rapid Transit rail system, so it is a transit-oriented redevelopment and easier for employees and shoppers to get to.

“The White Sands mall is now a benchmark for other malls in our portfolio,” says DeVos.

The White Sands story shows how large institutional owners develop practical knowledge bases that can be used throughout their portfolios — a much more efficient process than 900 different sets of building owners and managers independently learning and wrestling with “going green”.

While there is good news in the form of green leaning institutional property investors and investment managers, Asian real estate managers and owners are at a different stage of the sustainable investing cycle, says Andrew Nicholson, head of asset services, CBRE Asia Pacific.

According to Nicholson, Asia Pacific property owners have made strides in the broader sustainable investment universe, but the market remains in a relatively nascent, albeit growing, stage of development. It is encouraging that substantial room exists for green penetration to evolve into a mainstream proposition. The major real estate funds from the developed world are often implementing green guidelines, but there is a mismatch in the deployment of shorter-term capital into green initiatives, particularly from closed-end funds, he continues.

Academic and industry studies have pointed to sustainable management as inherent to viable, or even superior, real estate investing, but short term property investors have been loath to absorb upfront costs, adds Nicholson.

On a larger scale, there usually is no additional mechanism for rewarding property portfolio managers for reducing the carbon footprints of their assets, beyond the simple savings on utility bills. Yet the reduction in greenhouse gas emissions is also a valuable accomplishment, contends Nicholson.

Green technology is already sufficiently mature to encourage acceptance, if national and other governments would provide some additional incentives, say some. CBRE expects that appetite to retrofit buildings, enhance energy efficiencies, and even a demographic of “net-zero” energy consumers, to drive increased demand for green technology solutions in this region, according to Nicholson. Net zero defines a building that may use more energy during the day or through some seasons, but at the end of a year has produced as much energy as it has consumed. Typically, such buildings are very energy efficient and generate electricity through solar-power or wind installations.

Still, while greening property assets is not universal, the continual progress made in sustainable property systems and hardware is broadening ways for investors to save money.

Principal Real Estate Investors, for example, recently installed cogeneration units in a 111,904-square-metre high-rise apartment building in the US state of Massachusetts; until recently, this type of equipment usually was associated with industrial enterprises, remarks Jennifer McConkey, equity operations and sustainability director with Principal Real Estate Investors. A cogeneration unit produces electricity, often by burning natural gas, but the waste heat generated is not merely vented and lost, but rather converted to hot water and air and, with additional equipment, even cooling.

“With the technology available today, it’s possible to identify opportunities to cost-effectively reduce energy consumption in many buildings regardless of energy costs,” says DeVos.

The greening of urbanity

Increasingly, institutional real estate investors are deploying sustainable management practices in their portfolios, and also orienting their assets to those cities with the best future prospects in regards to quality of life and the role it will play.

The story of Portland, Oregon, is instructive, she says. The Urban Land Institute recently placed the notably-green Portland as the third-best city in the United States in its 2017 Emerging Trends in Real Estate survey, which ranks the top US cities from a real estate and development perspective.

In a related vein, Grosvenor released a study in 2014 ranking major global cities by “resilience”, or the ability to withstand environmental challenges and shocks, which might include water shortages, declining arability of land, or failed infrastructure.

“From a real estate investor’s perspective, resilience allows cities to preserve capital values and generate sustainable rental income in the long term,” states the report. Three Canadian cities — Toronto, Vancouver and Calgary — topped the list as being the most-adaptive and least-vulnerable cities in the world.

Different cities have risen and fallen over the millennia, or of more concern to today’s property investors, prospered and declined in recent decades. Because of the luck of geography and history, many cities rest on natural harbours or are national capitals, and both features are difficult to fabricate.

But much of modern commerce has evolved into services, such as tourism, entertainment, software and finance, and such firms can locate where the living is best. Going forward, geography and history will vie with amenities and quality of life to attract urban residents.

Cities and investors that do not emphasise green in their objectives may find their bottom lines too often, well, in the red.

Benjamin Cole is a freelance writer based near Korat, Thailand.

If there was a worse year than 2008 to launch an institutional property fund, you would have to be a nonagenarian to remember it. Yet, into the teeth of the global financial crisis, Principal Real Estate Investors launched a seven-year closed-end fund with 100 percent of assets LEED-certified Silver, Gold or Platinum — rankings from the US Green Building Council’s green rating system.

Despite challenging market fundamentals, the fund has, to date, delivered on its targeted rate of return and achieved top-quartile performance for its vintage — and also achieved top-tier rankings in the Global Real Estate Sustainability Benchmark.

“Based on our success, we recently launched its successor fund, which closed in 2016. Notably, the lead investor from the first fund is also the lead investor in the second fund,” says McConkey. Both green funds mentioned are closed and no longer offered to new investors.

The fact a for-profit green-property investment fund can attract investors, and then draw repeat investors, speaks volumes about the increasing desirability of sustainable investing.

Investors, no doubt, are looking for returns. But they may conclude a building efficiently managed and monitored to reduce electrical and water consumption — and create a healthier work environment — is probably also better-managed on other metrics, such as marketing or preventative maintenance, and less likely to hit an unexpected snag, such as a nonremediated environmental clean-up problem.

“Our second green fund further demonstrates that there is a market for and financial case for investing in sustainable, high-performing real estate,” concludes McConkey.